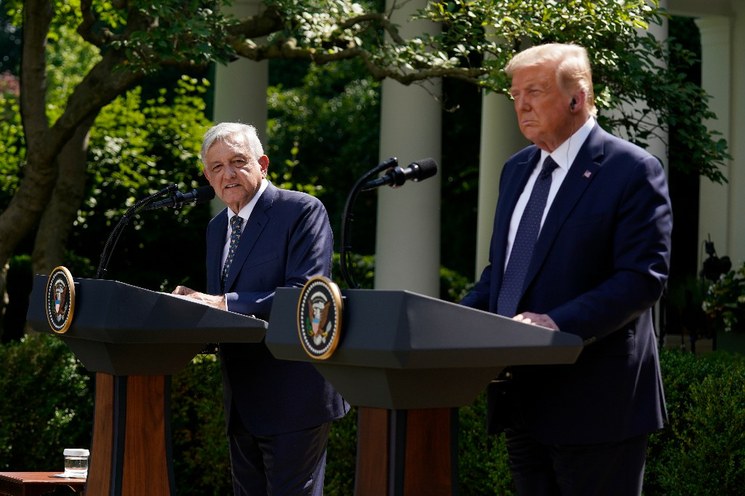 Few more painful moments for a political leader, than when, in the name of pragmatism, principles have to be betrayed. Politics without symbols is simply a juggling game. The countries, all of them, value their national emblems above all. At least for a couple of centuries, when the concept of the Nation-State was just formed, “sovereignty” is considered a supreme value.

For Mexico, a long history of stumbling and hitting, gave sovereignty exceptional importance. Direct neighbors of the greatest military and economic power on our planet, Mexicans of the 20th century were educated around a defensive idea of ​​our national identity.

For this reason, surely the first week of July can be a terrible experience in the political life of President Andrés Manuel López Obrador. On Wednesday afternoon, he must enter the White House to personally “thank” President Donald Trump.

Of course, managing the neighborhood between Mexico and the United States has always been an extremely complicated issue. Just over 100 years ago, US troops carried out military operations in Mexican territory. It was also a fact that the old and stable Mexican political system was born after President Plutarco Elías Calles signed the painful “Bucareli Treaty”.

And although practically all the leaders of our homeland history expressed in some way or another, generally discreet, their admiration for the northern neighbor – from Morelos to Juárez, from Díaz to Alemán, from Echeverría to Salinas -, they invariably sought to emulate the idea. of modernity from the neighboring empire, and they often used it to try to excuse their own failures.

Historically, Lázaro Cárdenas – AMLO’s greatest emblem – was probably the only Mexican president who found the moment to confront the giant. At the other extreme, the most pro-American position would be disputed by many. Among others, Miguel Alemán himself, Carlos Salinas, Felipe Calderón.

“Revolutionary nationalism” was undoubtedly one of the ideological pillars of the PRI system and, in particular, the segment of society that identified with what was once known as “the left”. First of all, López Obrador himself.

Formed at the Faculty of Political Sciences of UNAM in the 1970s, López Obrador had to drink from an anti-imperialist vision with a strong Marxist scent, which always admired the Cuban Revolution and the progressive causes of the forgotten of the earth. . And the fact is, for much of the good, the emotional vigor of the active Four-You bases comes from there.

Therefore, the afternoon of Wednesday 9 could hurt so much. Above all, because his interlocutor is the most radical, thunderous, racist, and anti-Mexican character who has held the presidency of the United States for many, many years. And because Mr. Trump will use it electorally.

If Enrique Peña’s decision to open Los Pinos to candidate Trump in 2016 was condemned by the vast majority of Mexicans, the fact that AMLO’s first trip outside the country is to Washington is shaping up to be an even worse idea. Everything points to a lose-lose.

Given the country’s economic fragility or levels of insecurity, it could be understood that, during the renegotiation process of the free trade agreement, the Mexican government had to yield to constant rhetorical fire and even Mr. Trump’s threats. But once the new agreement comes into operation … a formal work visit, to thank?

In the event that Trump managed to boast to his far-right base the head of the president who, according to him, will pay for the wall, badly for Mexico. And if the maneuver does not work, lending himself to the Republican game would leave him in a position of great weakness before the virtual Democratic candidate, Joe Biden.

Certainly, that of Mexico is one of the few leaders with high levels of approval. And it is also true that, despite what the Foreign Ministry has not done, it has been valued for decades among the circles of Mexican activists based “on the other side”, but it seems unlikely that it will continue to work asking their followers at a rally that, by show of hands, tell them if they want to fight with “Mr. Trump”.