For those of us who grew up shouting and jumping that “He who doesn’t jump is a yankee-He-who-doesn’t-jump-is-a-yankee!” it could be edifying to witness the decline of Pax Americana, that almost a century of American hegemony. It would be something like what happened to a large part of Mexican society at the end of September 2001, which, out of ignorance, had some sympathy for the beasts that crashed two passenger planes into the World Trade Center in Manhattan. It was as if, seeing the neighboring building collapse, they exclaimed: “Ah, now I will be able to enjoy the landscape”!

Pillar of stability and exploitation typical of “savage capitalism”, the United States continues to be the undisputed military power on the planet, but no longer the superior force that we supposed at the end of the last century, after the Soviet collapse.

China. A more efficient economic model -state capitalism–, a gigantic market to which it has no access and in recent decades has led the big U.S.A. to lose competitiveness and influence in large regions of the planet.

Russia. In the political arena, the US leadership also loses to the savage authoritarianism of Vladimir Putin and his war adventure in Ukraine, which has had the tacit support, or something very similar, of China itself and the vast majority of countries outside of Europe.

At this point in life, thinking about the consequences, it would seem naive to celebrate the decline of the American empire. Never better than anyone´s  personal fantasies, the American model continues to be, the least bad. Furthermore, neither China nor Russia today have the strength to impose a new global supremacy.

It is that extremist right made up of a strange alliance of oligarchs like Donald Trump, broad segments of a Christian fundamentalism that has made its own the racist, xenophobic and violent roots that seemed historically defeated by the democratic liberalism with which that country was also born.

In a somewhat discreet alliance with dictators from other latitudes, the rhetoric of MAGA (Make America Great Again) has known how to use new communication technologies better than anyone else to form a powerful anti-system political bloc that is also joined by the weapons, the great economic interests of the hydrocarbon era and, of course, a good part of the ultra-rich from the rest of the world.

It is a kind of frivolous nihilism that threatens to return to the White House.

We should not blame “polarization” or the “Un-United States of America”, when the assault of that very vocal minority that has crushed even the old guard of the Republican Party is evident.

It is clear that the main opposition to the necessary common front between governments and societies to stop the ravages of climate change comes from this third enemy.

It is clear who intends to widen the gap between the “one-per-centers” and the rest of humanity.

It is clear who wins with the technological nihilism of “post-truths”. It is the contempt for democracy and its values ​​that third and fearsome enemy. 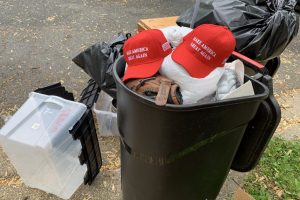